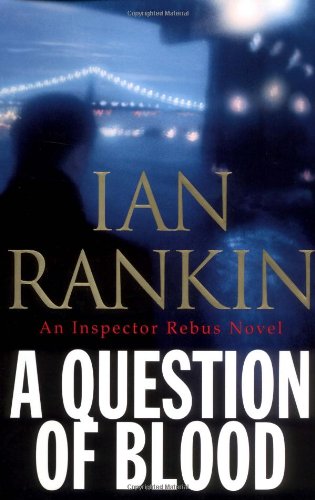 A QUESTION OF BLOOD: An Inspector Rebus Novel

The 14th novel to feature the always compelling (and, as his name suggests, perpetually puzzling) John Rebus begins with what seems to be a uniquely American crime: a madman enters a school and starts shooting, killing two students and wounding a third before turning the gun on himself. But we're in Rankin country—a perpetually damp and morally bankrupt Edinburgh—with Rebus and Siobhan Clarke searching for the real story behind what seems an act of sheer madness. This immensely satisfying police procedural has plenty of forensic science, but Rebus knows that "none of it might make them any the wiser about the only question that mattered....The why." Why did Lee Herdman, a drop-out of the U.K. version of the Special Forces, go on a rampage? Why was James Bell, the son of a self-righteous Scottish M.P., merely wounded? And why are two Army investigators sniffing around the case? A subplot has Rebus himself under suspicion of murder: a minor criminal is found dead, burned in an apartment fire, and Rebus shows up with heavily bandaged hands the next morning. The detectives encounter every stratum of contemporary Scottish society, from angry teenage toughs and petty criminals to the privileged and the powerful. It's a complex narrative, perhaps too much so at times, but the plot is less important than Rebus himself, a brilliantly conceived hero who is all too aware of his own shortcomings. In an essentially amoral society, his moral compass is always pointed steadily towards the truth.

The Guardian A Question of Blood