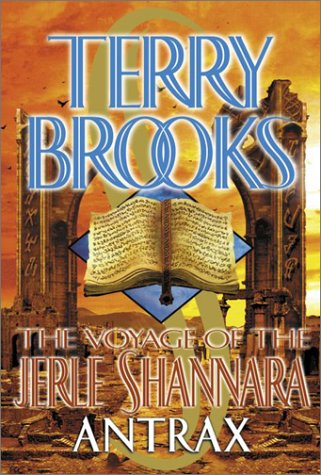 THE VOYAGE OF THE JERLE SHANNARA: Book Two: Antrax

Continuing the saga begun in (2000), bestseller Brooks opens this slick, lightweight fantasy with our band of heroes (Druids, elves, shape-shifters, Rovers, etc.) trapped on an island ruled by the evil artificial intelligence Antrax. Antrax has lured this disparate crew to its underground lair in order to use their assorted magics to expand its influence across the world of Shannara. The expedition's leader, the Druid Walker, wants to steal Antrax's ancient technology, but to gain it, he must engage in deadly combat with the machine. The treacherous seer, Ryer Ord Star, and the young, frightened elven prince, Ahren Elessedil, join the fight. Meanwhile, Bek Ohmsford, a protégé of Walker's who's been left mostly in the dark about his own magical potential, must try to convince his sister, the dangerous Ilse Witch, that his version of their shared past is true, as he struggles to keep her from killing him or his friends. Also complicating the plot are the battles of the Rovers to reclaim the group's airship—the only means for the adventurers to return home. Some emotionally painful encounters occur with former friends who have been enslaved by Antrax, turned into cyborgs and forced to do the nasty AI's bidding. Brooks's fans are sure to be pleased with this action-packed yarn, which neatly weaves the many plots and characters into a coherent whole. Those readers looking for more depth or less predictability are unlikely to have started on this series in the first place.