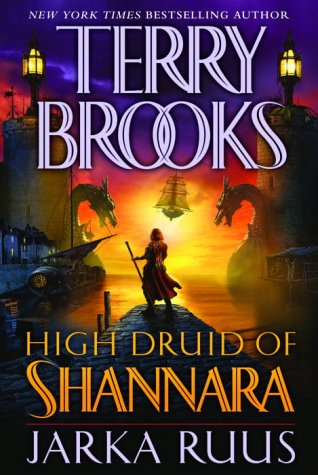 Bestseller Brooks's first book in a new trilogy treads complacently along the well-worn path of its predecessors. Set 20 years after the conclusion (in 2002's ) of the three-volume , it introduces the next generation of Ohmsfords and Elessedils: Penderrin, airship-flying nephew of former Ilse Witch and now High Druid (or Ard Rhys) Grianne Ohmsford; and Khyber, the Elven Prince Ahren Elessedil's headstrong niece. Teenaged protagonists can be annoyingly clumsy, and these two are no exception. As they set out to rescue Grianne from her politically motivated imprisonment in a bleak parallel plane known only as the Forbidding, they manage to repeatedly draw the attention of their pursuers, fall inopportunely in love and even kill a member of their own party. That neither Pen nor Khyber has the mitigating talents or charm of earlier Shannara heroes leads to the inevitable question of why exactly Fate has decreed that they should be the ones to take on this quest in the first place; a hope of learning the answer, ironically, may be the most compelling reason to anticipate the sequels. While Pen's fear that his family's magic is "thinning out" may parallel real-world criticisms of the most recent Shannara tales, Brooks does know a lot about the proper care and feeding of golden geese. Jaded readers are likely to seek their thrills elsewhere, but fans of formula fantasy will be quite content with the smooth prose, vivid descriptions and comfortable pacing.