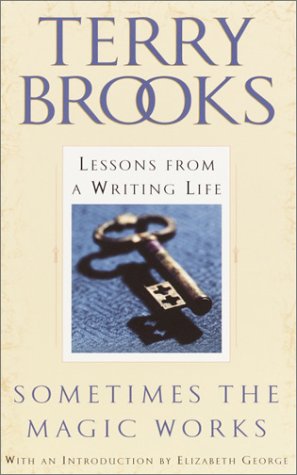 SOMETIMES THE MAGIC WORKS: Lessons from a Writing Life

"If you don't think there is magic in writing, you probably won't write anything magical," Brooks asserts in this succinct and warmhearted autobiographical meditation on the writing life. He views his success as a miracle and credits editor Lester del Rey ("What he had given me was the kind of education young writers can only dream about") for his discovery and Tolkien for the inspiration that drove him to choose fantasy adventure as his medium. Brooks, who practiced law before becoming a full-time author, stills finds himself amazed that his "sold in record numbers and changed the face of publishing," becoming the first fiction title to land on the trade paperback bestseller list. He still marvels that del Rey chose his first novel to prove that post-Tolkien epic fantasy could sell in vast numbers and that it launched a new generation of fantasy authors. Brooks often refers to his old mentor's sage advice ("Thinking about a book before you wrote it was as important as the writing itself") and promotes outlines ("You can either do the hard work up front or do it at the end"). He also discusses the disappointments encountered in a 30-plus-year career that has seen struggles with a novelization () and less than stellar sales for some works not connected to the Shannara empire; yet he keeps a positive attitude about the writer's never-ending quest, which requires "determination, instinct, and passion."