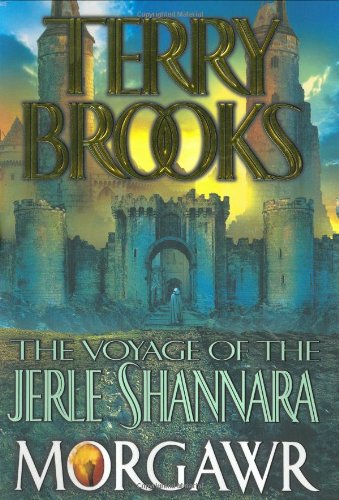 THE VOYAGE OF THE JERLE SHANNARA: Book Three: Morgawr

This last installment of the Voyage of the Jerle Shannara trilogy, which chronicles the exploits of the remaining adventurers who set out in (2000) and staggered through the tribulations of (2001), may not be up to the standard of bestseller Brooks's early work (, etc.), but it proves once again that he puts out books that sell because of their quality, not just because of his name on the cover. As newfound mage Bek Ohmsford and his cousin Quentin Leah rejoin the Free Rover crew of the after destroying Antrax, tensions mount, for the Ilse Witch—the Rovers' mortal enemy—has been revealed to be Bek's sister, Grianne, and is now under his protection as she struggles to break out of the catatonic state induced by her encounter with the Sword of Shannara. Worse, the Druid Walker Boh has died, leaving behind only cryptic instructions to those who followed him into Parkasia, and the Morgawr, who trained the Ilse Witch and now seeks her destruction, has captured elven prince Ahren Elessedil and Ryer Ord Star and is using Ryer's talents as a seer to track the and those who ride it. As usual, Brooks leaves at least as many loose ends as he ties up and drops in several surprises. Some references won't mean much to someone unfamiliar with this trilogy or the larger Shannara time line, but otherwise the book's neat and subtle exposition makes it quite accessible to new readers without alienating current fans. Neither groundbreaking nor recycled, this book is simply a good read.