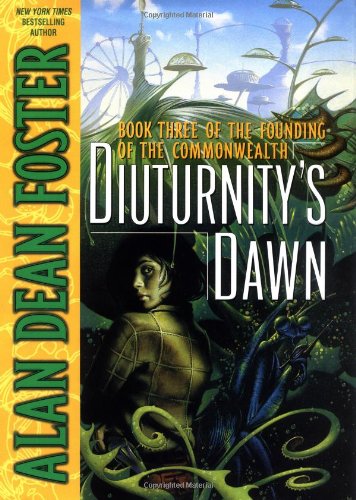 DIUTURNITY'S DAWN: Book Three of the Founding of the Commonwealth

If the idea of big bugs (the thranx) and human-sized snakes (the AAnn) makes you squirm, you'll have fun with bestseller Foster's latest installment (after 2000's ) in his saga of interspecies conflict set in the far reaches of the galaxy. The fanatic Elkanah Skettle, a human, together with his evil thranx associate, Beskodnebwyl, plan to terrorize a huge fair on the planet Dawn, as tensions on another planet build perilously close to war. After some pointless perambulations, two amiable preachers of different species manage to intervene, handily and unconvincingly putting a halt to the nefarious schemes of Skettle and his insectoid partner. Eminently readable the narrative may be, but it rambles on, more concerned with describing body parts (both alien and human) and the various species' responses to each other than with dramatizing the tale through incident and adventure. The action really picks up only when some scientists who have

been examining enigmatic sculptures above ground uncover beneath the surface a colossal chamber containing millions of unknown individuals within pods. The bright and winsome heroine, Fanielle Anjou, is a plus, though those fond of the traditional BEMs who lust after human females will lament the failure of the thranx and AAnn to express any sexual interest whatsoever in Fanielle. Younger readers should be particularly enthralled.