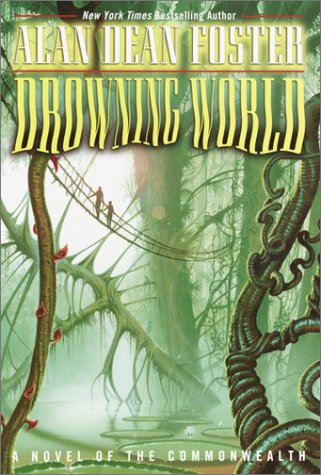 DROWNING WORLD: A Novel of the Commonwealth

Bestseller Foster's latest Commonwealth novel (, etc.) offers the kind of sure-fire entertainment that keeps his fans coming back for more. On the distant planet Fluva, torrential rains that leave it barely habitable also make it a treasure trove of rare botanical specimens. When the human prospector Shadrach Hasselemoga crashes in a remote area, the only crew available to search for him is the warrior Jemunu-jah, one of the native Sakuntala, and the immigrant Deyzara trader, Masurathoo. This exceedingly odd couple—culturally different and physically repulsive to each other—promptly crash also. While the rescuers and the rescued are all slogging it out of the ultimate rain forest, the reptilian AAn empire is fomenting bloody trouble between the Sakuntula and the Deyzara. This leaves Commonwealth administrator Lauren Matthias in the hot seat, with refugees swarming in to her limited facilities and the bodies of the innocent piling up, with few resources to help. But it's the survivors of the rain forest who bring new knowledge that helps save Fluva, along with quick work by Matthias. The human characters are notably less developed than the aliens, and the AAn Empire is something of a straw foe these days, but the author's mastery of his exotic setting cannot be denied.