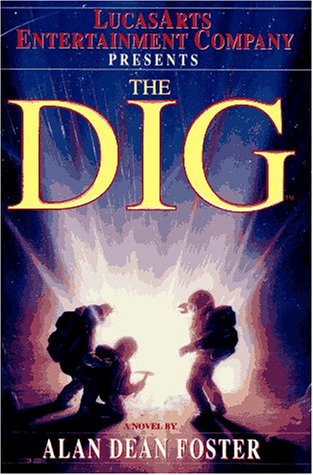 That this isn't an everyday SF novel is evident from the book's credits: ``LucasArts Entertainment Company presents The Dig, by Alan Dean Foster, based on a story by Sean Clark, inspired by Steven Spielberg.'' The text reveals that, in fact, this is scarcely a novel at all; rather, it's a computer adventure game--specifically, The Dig, available later this year on CD-ROM for PCs--translated onto the page. The premise is simple: a party of astronauts travels to an asteroid that has veered too close to Earth; when they set off atomic charges to spin the rock into a stable orbit, they uncover a deserted alien civilization and go exploring. Foster (Mid-Flinx, Forecasts, Oct.16), who's an old hand at adaptations (Alien 3, etc.), doesn't get past Go here, as he's roundly defeated by stock characters--a phlegmatic German scientist, an ingenious American one, etc.--and, above all, by the computer gaming form. As any gamer knows, computer heroes run around collecting objects, solving puzzles and, often, deciding which of three tunnels to go down. And so it goes with Foster's crew, along a monotonously linear plot line that touches on the sort of simplistic metaphysics (can disembodied intelligences be happy?) sadly typical of computer games. Major ad/promo; simultaneous Time Warner AudioBook. (Jan.)
close
Details