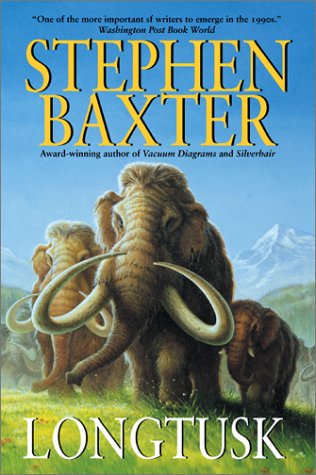 Meticulously researched, simply told and appropriate for readers of all ages, this second volume (after 1999's ) in Baxter's Mammoth trilogy brings to compelling life the complex culture of these giant creatures. It's sixteen thousand years B.C., and woolly mammoths roam the earth, inhabiting the steppes of Beringia, the land bridge linking Asia and North America. Climactic changes have caused the steppes to recede, but humans, whom the mammoths call Fireheads, pose the greatest threat to their survival. Longtusk, whose coming-of-age story this is, must save the mammoths by spearheading an epic journey. Separated from his family, Longtusk is enslaved by the Fireheads, who make him a beast of burden. But a Dreamer (Neanderthal) woman foretells his future: Longtusk will die, along with the Dreamer who once saved his life and that of the Firehead matriarch, Crocus. Although Longtusk escapes his captors and finds a steppe that will support a small mammoth herd, years later Crocus and her people return, seeking to drive the mammoths away from their habitat. Longtusk embarks on a final heroic mission to save the mammoths—and meet his fate. The book's themes of ecological disaster, warfare and change resonate deeply with today's concerns. When a mastodont tells Longtusk, "You and I must take the world as it is. [The Fireheads] imagined how it might be different. Whether it's is beside the point; to the Fireheads, change is all that matters," it's clear that humans have not changed at all.