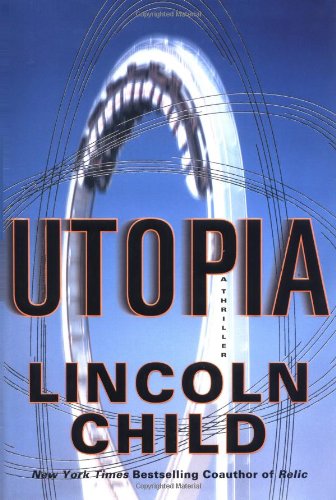 A fantastic near-future amusement park is the setting for this techno-thriller by Child (coauthor with Douglas Preston of the Preston/Child bestsellers) in his first solo outing. Utopia, a Nevada amusement park extraordinaire, features several elaborate holographic theme worlds (like Camelot and Gaslight, which meticulously recreates Victorian England), all run by an ultrasophisticated computer system and serviced by robots. When a series of fluke accidents culminates in the near death of a boy on a Gaslight roller coaster, the Utopia brain trust calls in the original computer engineer, Dr. Andrew Warne. Warne arrives with his bristly 14-year-old daughter, Georgia, and sets to work solving the Gaslight problem, though he can't believe that the system is willfully malfunctioning, as the evidence seems to indicate. To complicate matters, Utopia's manager, Sarah Boatwright, is Warne's ex-girlfriend, and an obvious mutual attraction exists between Warne and Utopia systems controller Teresa Bonifacio. Just as Warne gets to work, violent attacks erupt all over the park, masterminded by an impassive psychopath known as John Doe and carried out by his cadre of henchmen, including a computer genius and a crack marksman. For three hours, Doe holds the park hostage, and Warne, Boatwright and Bonifacio race against the clock to foil his plans. Child creates a convincingly self-contained world, populated by amusing creations like a cyber-dog called Wingnut and clever descriptions of futuristic amusement park rides. Sluggish prose and an overload of technical detail slow the pace, but Child proves he is capable of fireworks (literally) at the rousing conclusion.