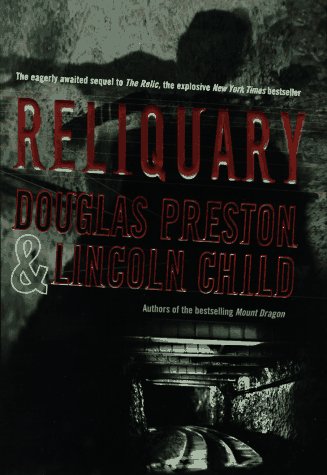 The netherworld of New York City--its subways, aqueducts, sewers and the homeless who inhabit them--proves as shuddery a setting for the authors' latest scientific monster mash as the American Museum of Natural History did for their bestselling Relic, to which this is the sequel. In the earlier novel, Mbwun, a ferocious creature that seemed part reptile, part human, rampaged through the museum killing people. The sequel, set 18 months after Mbwun was destroyed, opens with a police diver finding the headless bodies of two people apparently killed by underground cannibals. The corpses are sent to the museum's lab for analysis, which brings a number of returnees from Relic--burly homicide cop Vincent D'Agosta, anthropologist Margo Green, New York Post crime reporter Bill Smithback--to the case. They're soon joined by the novels' Sherlock Holmes figure, the irresistibly cool Special Agent Pendergast of the FBI. Forays by these principals into the kingdom of the Mole People (underground homeless), plus some forensic breakthroughs, point to a race of mini-Mbwun at work in an escalating series of savage killings that incite the city's upper crust to civil disobedience. The city's answer, to flood its nether vaults, turns out to threaten a global catastrophe that only Pendergast and company, aided by Navy SEALS, can avert. The story's ""surprise"" ending makes as much sense as ketchup on popcorn, and the entire novel has a desperate air about it as the authors stuff it with complications and, by pitting the homeless against the swells, try to create a kind of Decapitation of the Vanities. It's high on suspense and tremendous fun in parts, though, especially when exploring the city's nightmare underbelly. Literary Guild and Doubleday Book Club alternate selections. (May)
close
Details