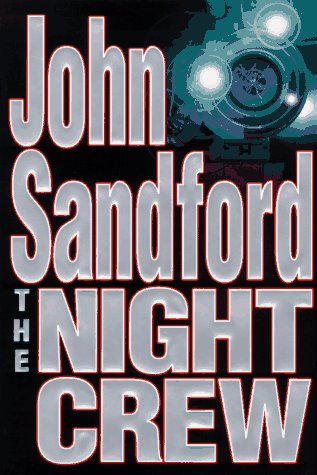 Anna Batory, thin and ""rail-hard"" with ""pale blue killer eyes,"" runs a small, independent TV-news night crew that peddles clips of crime scenes, fires, car crashes and other mayhem to local TV stations for a tidy profit. As always with Sandford (Sudden Prey), the novel opens on action, in this case the crew's taping of a lab break-in by animal-rights activists and of a drug-crazed teenager's jump from a hotel window. The crew moves from voyeurs of the action to unwilling participants when Anna's part-time cameraman is shot dead and mutilated and a friend of his is murdered in an equally grisly manner. It becomes increasingly clear that a psycho is stalking Anna and her crew. To nail him, she teams up with the divorced father of the jumper, lawyer and ex-cop Jake Harper. Anna, Jake and another crew member and his new girlfriend are all attacked by the psycho before the gory finale. The shift from his usual Minneapolis setting to L.A. brings out the noir in Sandford (""the real dawn, a great, unhappy light, like an old piece of newspaper being pushed over the mountains""), and the action and suspense are up to his usual high standard. But Anna is neither as appealing nor as complex as his customary hero, Lucas Davenport, and other characters also seem grey at times, their movements perfunctory. One can't blame Sandford for wanting to try something new after eight ""Prey"" novels since 1989 (Sudden Prey, etc.), plus two thrillers under his real name, John Camp, but let's hope we haven't seen the last of Lucas. BOMC main selection; Putnam Berkley audio; author tour. (Apr.)
close
Details