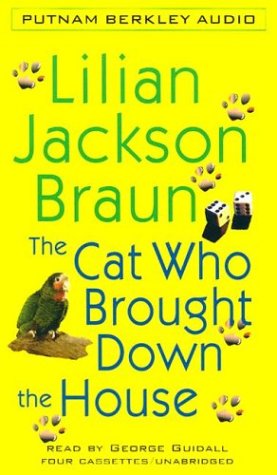 THE CAT WHO BROUGHT DOWN THE HOUSE

Guidall, the veteran audio reader who's read countless books, returns for another foray into the goings-on in the tiny town of Pickax, "400 miles from anywhere." Guidall's versatile voice creates a whole town of characters: a glamorous, pretentious interior designer; a fluttery librarian; gravelly columnist James Quilleran (the protagonist); and a new character, elderly Thelma Thackeray, a former Moose County resident returning after six decades in Hollywood. As usual, the mild mystery (who kidnapped Thelma's prize parrots; and was the death of Thelma's brother, an elderly veterinarian, from natural causes or by murder?) takes a backseat to the pleasure of simply spending time in the company of dry, witty Quilleran, his clever cats Yum-Yum and Koko and his eccentric friends and neighbors. Fans of the series will happily settle down with headphones for this 25th entry.