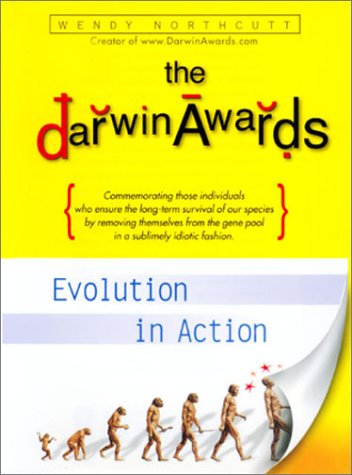 THE DARWIN AWARDS: Evolution in Action

Anyone who has e-mail has probably already been entertained by the Darwin Awards, honors that stand out from the miasma of e-humor for several reasons: they are often genuinely hilarious and they are supposedly true. For those unfamiliar with these awards, they are given to people, mostly now deceased, whose actions reveal an astounding lack of common sense. The awards go only to those who have either died or rendered themselves unable to breed, confirming Darwin's belief in the survival of the fittest. Among the winners: terrorists who set their bombs on daylight saving time and delivered them on standard time, thus blowing themselves up; and a lawyer who crashed through a skyscraper window while demonstrating its safety. The audiobook also contains an honorable mention category for those who survive their idiotic behavior. This set provides hours of bizarre yet disturbing listening, mostly drawn from the author's popular Web site, DarwinAwards.com. Jason Harris does an excellent job of reading each reported incident; basically, they sound like standup comedy: yarn after yarn of such astounding stupidity that one cannot help but laugh. The lack of common sense exhibited here is undoubtedly comical, but Harris's reading accentuates the fact that beneath the laughter lurks a kind of pathetic sadness.