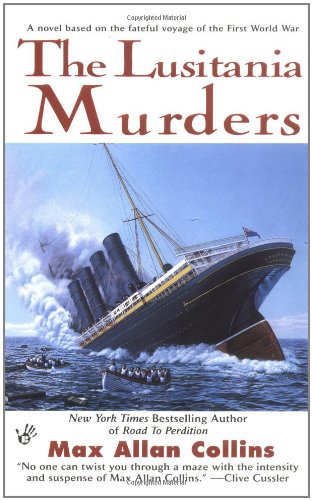 In this traditional, pre–World War I mystery, prolific Collins (, etc.) emulates the memoir-like writing style of S.S. Van Dine, a mystery writer and art critic popular in the Jazz Age, and casts him as a journalist-cum-amateur sleuth. Humbled by the need to make a buck, the ever disdainful Van Dine agrees to board the in order to interview the ship's wealthiest passengers and investigate rumors that the opulent ocean liner is carrying munitions. While touring the vessel, Van Dine and his guide surprise three stowaways who may be German saboteurs. When one of them turns up dead, Philo Vance, the ship's dimpled detective, takes over and enlists Van Dine as her assistant and lover. Two corpses later, Philo and Van Dine deduce there's a traitor in their midst who is most likely one of the vessel's most esteemed passengers. Collins, author of several screenplays and movie/TV tie-in novels (; ), ably weaves a well-paced, closed-environment mystery reminiscent of Agatha Christie, but the acerbic Van Dine, who scorns popular fiction and politics, will grate on readers' nerves. Nevertheless, the author succeeds in resurrecting a long-forgotten writer and re-imagining the 's final voyage.