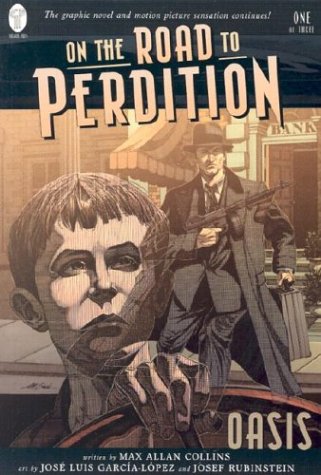 ON THE ROAD TO PERDITION: Book One: Oasis

This compelling volume is the first in a new series of three graphic novellas that build on the successful 1930s-era graphic novel and film. Together, they chronicle a six-month period unexplored in the original story. Once again, the protagonist is Michael O'Sullivan, a hit man in John Looney's Irish mob. When O'Sullivan's son and namesake, Michael, witnesses his father's on-the-job activities, Looney's son responds by slaughtering O'Sullivan's family (save for O'Sullivan and his son). O'Sullivan swears revenge, and he and young Michael set off on a cross-country journey, robbing banks of their mob "blood money" and pitting them against the forces of the Looney mob and those of Al Capone. Their journey to Perdition, where young Michael's aunt and uncle live, is fraught with tragedy, violence and death. Veteran author Collins has returned to graphic novels to continue this tale, and he's clearly comfortable with this material and era. In this volume, readers learn how the O'Sullivans rob banks and how their time together allows them to grow closer. Their bank jobs are hindered when young Michael gets scarlet fever and O'Sullivan must avoid the mob hit men find someplace for his son to recover. Will Michael's illness slow them down enough to allow their pursuers to stop them both permanently? Although Garcia-Lopez and Rubinstein's highly detailed b&w art isn't as meticulous as that of original series artist Richard Piers Rayner's, it still has a realistic cinematic style and winning characterizations.