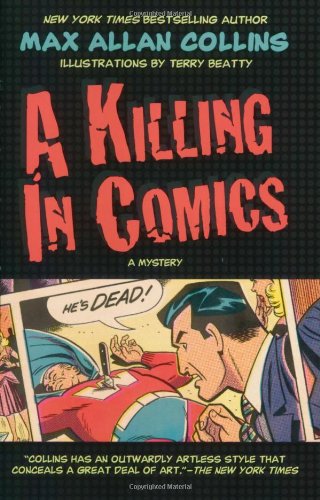 A Killing in Comics

Fans who admire Collins's superb Nate Heller series for its ingenious, innovative and well-researched solutions to historical mysteries like the Black Dahlia murder ( ) and Amelia Earhart's disappearance ( ) will find this bland, broadly sketched whodunit several notches below the author's best work. The action takes place in 1948 Manhattan, where Donny Harrison, publisher of Americana Comics, gets impaled on a huge cake knife at his 50th birthday party, and Jack Starr, troubleshooter for a newspaper syndicate, investigates the many who wished Harrison dead. The premise—setting a murder mystery among the legends who created the first iconic comic book heroes, represented here as Wonder Guy and Batwing (thinly disguised versions of Superman and Batman)—is promising, but instead of a thoughtful and insightful exploration of that idea, Collins settles for near parody. Terry Beatty ( ) contributes tongue-in-cheek, retro comic art throughout.