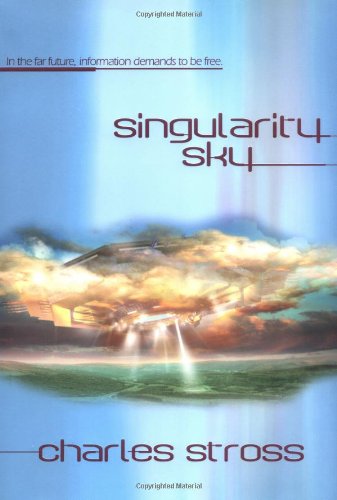 In his first novel, British author Stross, one of the hottest short-story writers in the field, serves up an energetic and sometimes satiric mix of cutting-edge nanotechnology, old-fashioned space opera and leftist political commentary reminiscent of Ken MacLeod. Spaceship engineer Martin Springfield and U.N. diplomat Rachel Mansour hail from an Earth that has gone through the Singularity, an accelerated technological and social evolution far beyond anything we can imagine. The Singularity was triggered by the Eschaton, a super-powerful being descended from humanity that can travel in time and that essentially rules the universe. Springfield and Mansour meet on the home world of the New Republic, a repressive, backwater society that has outlawed virtually all advanced technology other than that necessary for interstellar warfare. When one of the New Republic's colonial worlds is besieged by the Festival, an enigmatic alien intelligence, the Republic counterattacks, using time travel in an attempt to put its warships in position to catch the Festival by surprise. Springfield and Mansour, working for different masters, have both been assigned the task of either diffusing the crisis or sabotaging the New Republic's warfleet, no matter what the cost. As a newcomer to long fiction, Stross has some problems with pacing, but the book still generates plenty of excitement.

Toast: And Other Rusted Futures