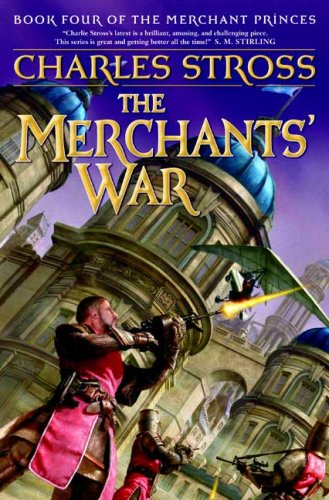 The Merchants' War: Book Three of the Merchant Princes

Readers unfamiliar with Stross's (2006) and its predecessors should hunt them down before diving into this breakneck fourth Merchant Princes episode. The clan, a Machiavellian trading dynasty whose members can cross among parallel universes, are losing control of their own affairs, embroiled in a shooting war with local royalty on the Gruinmarkt world and racing modern American black-ops agencies to unravel the secrets behind their world-walking ability. The latter subplot adds science-fictional flavor to a series already rich with economic and political themes and dense action scenes. The cost comes in characterization: familiar figures appear only briefly, and new players acquire little depth. Miriam Beckstein, journalist turned mercantile heiress, is still the nominal protagonist, but she spends most of this episode stuck one universe sideways from the main action. For sheer inventiveness and energy, this cliffhanger-riddled serial remains difficult to top.