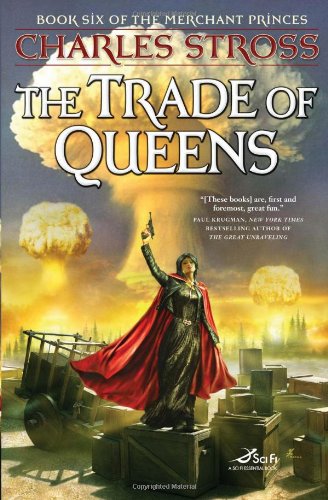 In the meandering sixth and final book in Stross’s Merchant Princes series (after 2008’s ), the war within the Clan Corporate fully spreads to our dimension. In the summer of 2003, Clan defectors attack Washington, D.C., killing President Bush and members of the Supreme Court and installing a barely disguised Dick Cheney, code-named WARBUCKS, as president. Meanwhile, Miriam, a Boston-area reporter and long-lost member of the Clan, is dealing with the fallout of the previous conflicts, including her unwanted pregnancy. The plethora of character deaths fails to resolve any plot lines, and while Stross’s breezy style makes pages of pedantic background go by quickly, they still feel like filler. The unsubtle political satire is dated and juvenile, and readers drawn in by inventive world-building earlier in the series will be sorely disappointed by its absence here.