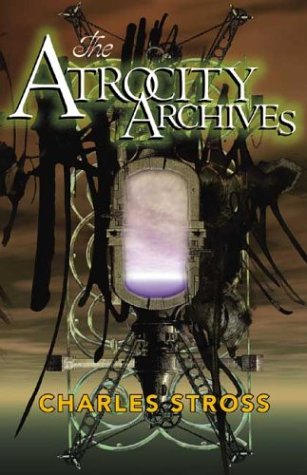 Lovecraft's Cthulhu meets Len Deighton's spies in Stross's latest, as the Scottish author explains in his afterword to this offbeat book offering two related long novellas, "The Atrocity Archive" and "The Concrete Jungle" (the latter previously unpublished). With often hilarious results, the author mixes the occult and the mundane, the truly weird and the petty. In "Atrocity," Bob, a low-level computer fix-it guy for the Laundry, a supersecret British agency that defends the world from occult happenings, finds himself promoted to fieldwork after he bravely saves the day during a routine demonstration gone awry. With his Palm, aka his Hand of Glory (a severed hand that, when ignited, renders the holder invisible), and his smarts, he saves the world from a powerful external force seeking to enter our universe to suck it dry. In "Jungle," Bob teams up with a cop, Josephine, to save the Laundry from a powermonger who seeks to stage an internal coup by using zombies as her minions. Amid all the bizarre happenings are the everyday trappings of a British bureaucracy. Bob gets called on the carpet by his bosses because he requested backup during an emergency without first getting his supervisor's okay and filling out the requisite forms. Though the characters all tend to sound the same, and Stross resorts to lengthy summary explanations to dispel confusion, the world he creates is wonderful fun.