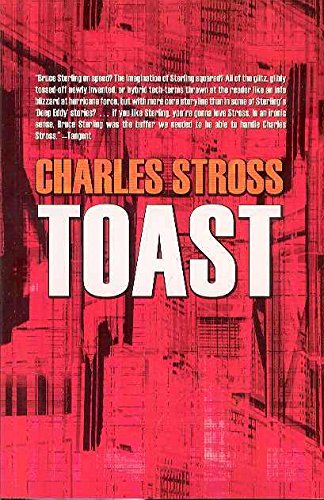 The title of Stross's provocative new SF collection—a revised, expanded version of a 2002 title of the same name—is a mordant reference to catastrophes at the climaxes of these 11 stories. In "A Colder War," a stand-alone sequel to Lovecraft's "At the Mountains of Madness," monsters from outside space and time are liberated as weapons of mass destruction by Russia and the Middle East. In "Antibodies," a mathematical theorem undermines the foundations of all computer encryption systems, forcing fugitive behavior from the narrator who has depended on the anonymity they hitherto ensured. "Ship of Fools," written in 1995, evokes the epic scale of Arthur C. Clarke's fiction in its projection of dire technological fiascos that rock the world at the turn of Y2K. In Stross's worlds, virtual reality is the new frontier, AI is a fact of life and everyone is fluent in the sometimes impenetrable technogeek-speak that goes with the territory. For all that, his characters are familiar and sympathetic hackers, slackers and opportunists, whose lives have not been improved by their technological expertise, and whose adventures he interweaves seamlessly with the circuitry.