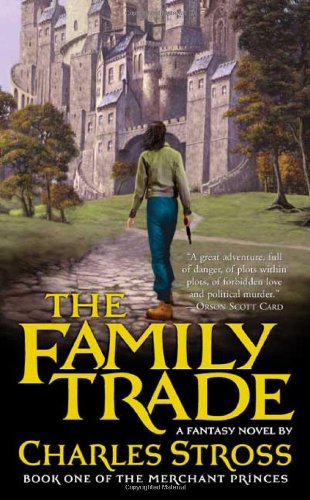 THE FAMILY TRADE: Book One of the Merchant Princes

Best known for his Accelerando novels ( , etc.) of an ever-speedier techno-Singularity, British author Stross mixes high-tech with medieval trappings in this highly entertaining science fantasy in the "misplaced modern" mode. Reporter Miriam Beckstein, recently fired for exposing a money laundering scheme and threatened by the criminals involved, finds that staring at her mother's antique brooch can move her from contemporary America to a Viking-settled parallel universe, where she discovers her true heritage as a countess among the world-walking, goods-smuggling Clan. Struggling to master the mores and politics of her new family, Miriam discovers trust to be the rarest commodity in which they deal. Earl Roland, her new love, may be too loyal to her uncle, Duke Angbard, while Roland's intended, the Baroness Olga, is much more than a silly heiress waiting to be married off. Miriam schemes to update the Clan's ancient business and make herself invaluable to their interests, before one of the many assassins after her succeeds. Stross makes much of the incongruity of modern technology alongside old-fashioned costumes and customs, and many will be reminded of Roger Zelazny's Amber books, which had similar dizzying intrigues.