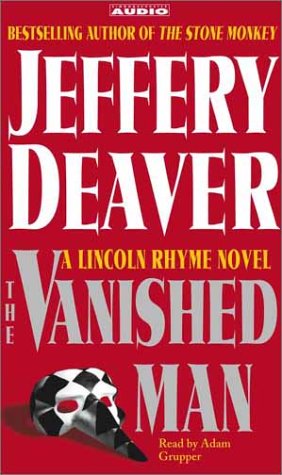 Not since Bill Bixby's has illusion played such a vigorous role in the investigation of a homicide. A girl is murdered, the killer is caught red-handed, then trapped in a sealed room with a hostage. A shot is fired and when the room is entered, it is empty. Deaver (; ; etc.) summons up a fifth tale in the Lincoln Rhyme series and loads it with his trademark twist and turns. Rhyme, a quadriplegic forensic criminologist, seems to have met his match in his new foe, dubbed "The Conjurer" by the police, a master of sleight of hand, illusion and misdirection, much like Deaver himself. Grupper does a fine job of keeping the thriller on the rails, and his depiction of Malerick, a villainous master of disguise straight out of a comic book (he regularly disappears in a flash of light and smoke), is riveting. Grupper's skill with gender and accents is marvelous. The structure of the book is nicely formatted for audio, as the killer narrates his own "performances" as if he were a ringmaster announcing the latest trick, using phrases like, "And now, revered audience...."