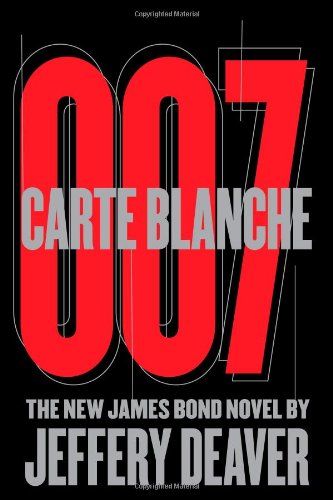 The James Bond franchise is thriving, and this terrific new pastiche will amply reward Bond fans and possibly bring new readers into the fold. Deaver (Edge), an avowed fan of the Fleming canon, has set the novel in the post-9/11 present, and Bond, that icon of the 1960s, handles the transition perfectly. The book opens in Serbia with 007 trying to uncover the meaning of "Incident 20," a cryptic reference that suggests an impending terrorist plot. Deaver deftly sketches in Bond's background: a veteran of the Royal Naval Reserve who had served in Afghanistan, he was languishing in naval intelligence until recruited by a new, super-secret team whose mandate is to "protect the Realm%E2%80%A6 by any means necessary," hence the "carte blanche" of the title. Most of the action takes place in South Africa, and the plot is predictable in a purely Bond-ian way (credibly incredible), but also intricate and inventive, surprising and satisfying%E2%80%94a testament to Deaver's skill as a storyteller. The plot and setting may be up to the minute, but Bonds aficionados will be comforted by the usual Bond tropes: his love of fast cars, fine drink, and gorgeous women (two of whom sport the traditionally clever and ridiculous names: Ophelia Maidenstone and Felicity Willing); his colleagues M, Moneypenny, and Q (who creates the world's most powerful iPhone%E2%80%94dubbed the iQPhone); and an appropriately perverse villain, Severan Hydt, a self-made tycoon with a fetish for decay and death, complete with suitably evil henchman. Fleming purists may balk at the hint of a New Age sensitivity in Deaver's Bond, but they will recognize one of the world's most enduring fictional characters: competent, courageous, charming, and cool. (June)
close
Details