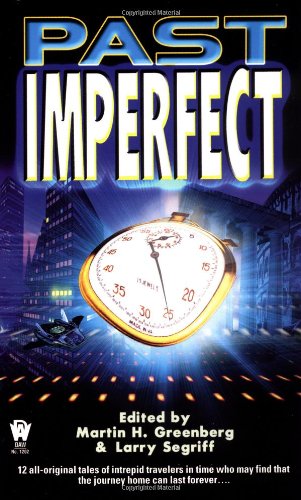 This fast, lightweight anthology of 12 time-travel tales contains a handful of standout stories, but many others rely on familiar tricks: Will the hero change his destiny by changing his past? Will the hero realize that that sound he heard all those years ago was his meddling future self? The most successful stories toy with genre conventions or use time travel as a device in support of bigger concerns. James P. Hogan's slyly amusing "Convolution" focuses on time-machine inventor Professor Abercrombie. The professor loses his notes before completing his machine, but a future version of himself sends a time machine back, embroiling Abercrombie in a neatly dovetailed succession of weird cross-time commutes. In Nina Kiriki Hoffman's amusing "Mint Condition," time travel takes a backseat to time-traveler Sissy's realization that her bosses are playing her for a fool. Family-centered stories include Jody Lynn Nye's light "Theory of Relativity," in which Rachel recruits another version of herself and tracks down their grandfather; Peter Crowther's emotionally fraught "Things I Didn't Know My Father Knew," about a man's opportunity to see his dead father; and Gary A. Braunbeck's touching "Palimpsest Day," wherein a man has the chance to change his life by intervening at one moment in his past. Newcomers to the genre will find many stories engaging, but too few of these entries question the clichés they perpetuate.