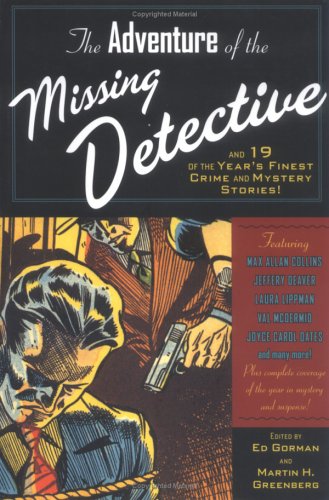 The Adventure of the Missing Detective and 25 of the Year's Finest Crime and Mystery Stories!

The editors of annual have changed the series' name, but continue to gather superior stories augmented by various "state of the mystery" reports. Jon L. Breen provides an overview of 2004's trends and awards. Edward D. Hoch looks at the year's short story collections and anthologies as well as nonfiction works in the field. Sarah Weinman, who surveys the development of mystery blogs, also selected the three entries that were published online. One of them, the chilling "Just Pretend" by Martyn Waites, is the gem of the anthology, which includes such name authors as Robert Barnard, Laura Lippman and Jeffery Deaver. The overall quality isn't as strong as some of its five predecessors, but the volume still offers its share of standouts, among them Val McDermid's wryly humorous "The Consolation Blonde" and Joyce Carol Oates's "The Banshee," which leaves readers hanging till the very end and beyond.