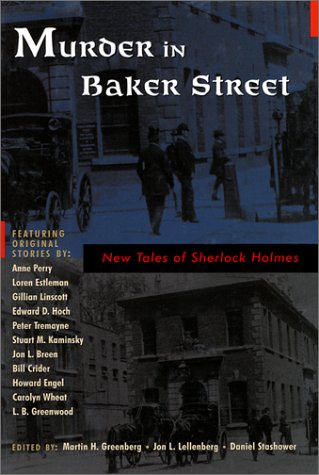 The three editors of this solid anthology, stalwart Sherlockians all, have persuaded 11 eminent mystery authors, none except Loren D. Estleman known as a Holmes pasticher, to do his or her take on the greatest of fictional detectives. The results are uniformly faithful to the spirit of Doyle's creation, though with their relative brevity and tight plots none could be mistaken for the leisurely, digressive work of the original Watson. The strong lead-off tale, Stuart M. Kaminsky's "The Man from Capetown," generates a high suspense level with an exotic, but not too exotic, mystery surrounding the murder of a South African diamond trader. A couple of the shorter stories (Peter Tremayne's "The Siren of Sennen Cove" and Anne Perry's "The Case of the Bloodless Sock") are too sketchy and contrived, though Edward D. Hoch ("The Adventure of the Anonymous Author") and Jon L. Breen ("The Adventure of the Cheshire Cheese") show that by keeping the plot simple one can be effective in miniature. L.B. Greenwood's melodramatic "Darkest Gold," which takes the sleuthing duo to the Congo to save the Pygmies, might have worked better at novel length. Gillian Linscott's light "A Hansom for Mr. Holmes" charms with its unusual cabbie's point of view. Carolyn Wheat perhaps comes closest to capturing the Doylean magic in her capstone tale, "The Remarkable Worm," in which Watson betrays his jealousy at Holmes's being immortalized at Madame Tussaud's. Three reprinted essays, one by Conan Doyle himself, round out a volume that should also appeal to readers who like good mystery short stories with a period flavor.