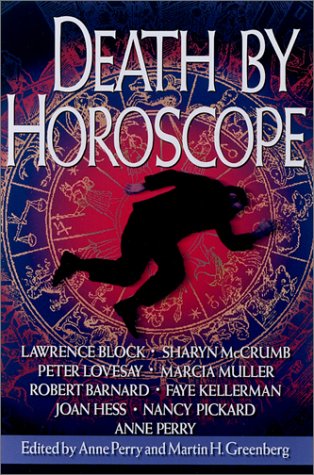 "Fidelma placed no great reliance on astrologers, for it was a science which seemed to rely solely on the interpretive ability of the individual," says Peter Tremayne in the first entry in this all-original anthology of mystery stories on the common theme of reading the stars. A few tales later a character in Edward Marston's "The Sea Horse" says astrologers are "complete crooks." Even Edgar-winner Perry admits in her introduction that she doesn't believe in horoscopes—unless "they tell me that I am unique and exciting and my destiny is full of wonderful things." Within those bounds of tolerance for the subject, most readers should find an attitude to sympathize with and a story or two to relish for its wit and good writing. Tremayne's contribution, for example, stars his wonderful creation, seventh-century Celtic nun Sister Fidelma, and as in his novels about her, he instantly plunges us into Fidelma's arcane but totally accessible world. In Marston's tale, a marvelously bitchy "yacht of fools" journey, the most sympathetic character (the astrologer) winds up dead. Jane Lindskold's "Slaying the Serpent" gives readers the always welcome thrill of outsmarting the detective, because they know in advance that the story's serial murders have something to do with astrology. Other tales from such reliables as Bill Crider, Peter Lovesey, Lawrence Block and Perry herself (a deft little period number called "The Blue Scorpion") add to the guilty pleasure—the same one many of us get every morning by turning secretly to the horoscope page.