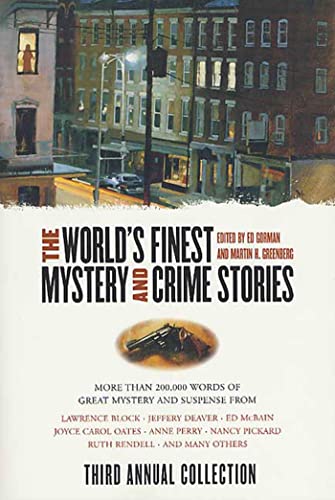 There might be some undiscovered gem of a short story published in 2001 that didn't make it into this impressively eclectic third annual collection, but it's hard to see how it slipped under the eagle-eyed radar of editors Gorman and Greenberg (and their deputies Larry Segriff and John Helfers, credited in the dedication as the people "who do 99 percent of the work"). The lively mix ranges from works by the usual prolific novelist suspects—S.J. Rozan, Ed McBain, Joyce Carol Oates, Jeffery Deaver, Donald E. Westlake, Ruth Rendell, Bill Pronzini, Marcia Muller, Val McDermid—to the welcome return of names (like Joseph Hansen and Clark Howard) not seen often enough on book jackets of late. Howard's story, "The California Contact," has enough rich material for a novel—including a hero who would rather be a boxer than a cop, a hit man called "the Leper" who "could not be identified by fingerprinting because all of his prints and part of several fingers had been eaten away by leprosy," and a beautifully orchestrated finale at Disneyland. Carolyn Wheat's "The Only Good Judge" offers a complicated, Hitchcockian plot, in which three villains commit each other's crimes, as well as some valuable wisdom about the erroneous image of judges as shaped by the TV series. With seven fact-and-opinion-packed reports on the world crime fiction scene, this anthology contains enough high quality reading material to sustain any genre addict's habit.