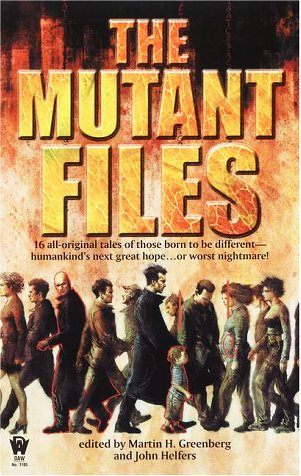 "The word mutant carries different connotations depending upon the point of view of the person who hears it," Helfers () notes in his introduction. Unfortunately, the title of this well-balanced anthology of 16 short stories may mislead readers. Indeed, freaky alien beings and comic book characters are in short supply here. Rather, these tales (which are written by the likes of Alan Dean Foster, Charles de Lint and Michelle West) draw readers into the worlds of everyday people who possess extraordinary powers: a Native American Indian who hits the jackpot on slot machines because he can smell the flow of electrons; a lithograph salesman whose ability to read people's minds is both a blessing and a curse; a newlywed wife who finds herself trapped in a New England version of ; and a meteorologist who can control the weather through his moods. Elements of SF, horror and even fantasy are woven throughout these stories, making them appealing to fans of all three genres. Even though a few entries depict mutants that have the same bizarre physical abilities, these characters are drawn so eloquently and sympathetically that it's difficult not to feel an affinity for each of them.