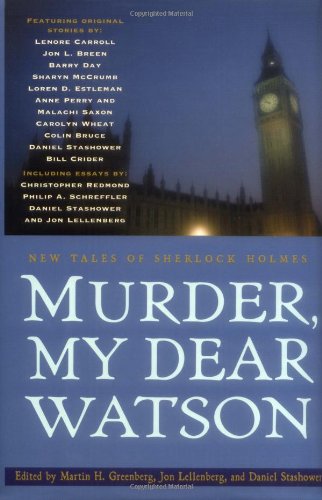 Like its predecessor from the same editors, (2001), this solid anthology offers some choice Sherlockian plums. The ubiquitous Watson often takes center stage in these 10 tales: Colin Bruce's "Adventure of the Dying Doctor" pits the good doctor and Mycroft Holmes against an improbable insurance and stock fraud scheme entailing an errant comet, while Holmes watches benignly from the sidelines. Bill Crider's "Adventure of the Young British Soldier" features a grudge-driven villain intent on poisoning Watson's former orderly, a hero from their service together in the Afghan War. Sharyn McCrumb's eerie, supernatural "The Vale of the White Horse" appeals mostly to those interested in sorcery and demonic spirits, not usually the province of Holmes and Watson. Other stories bring the legendary detective into contact with Queen Victoria, whose would-be assassins are foiled in the nick of time, and film genius D.W. Griffith, who is threatened by German spies seeking to prevent him from helping the allied war effort. Sherlock's own stage portrayer, William Gillette, solves a jewel theft case in a style worthy of his celebrated mentor in the book's highlight, Daniel Stashower's "Adventure of the Agitated Actress." Holmes devotees will welcome the three essays that conclude the volume, but others may wish the editors had supplied an additional tale or two instead.