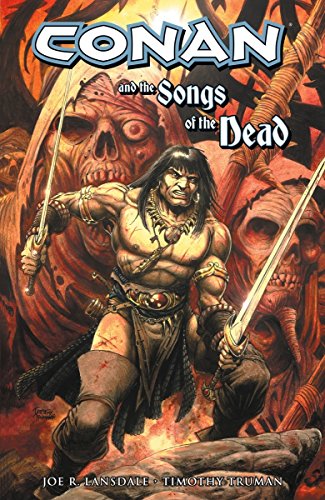 Conan and the Songs of the Dead

Two old pros have fun in this latest installment of the Conan saga. Robert E. Howard's muscle-bound barbarian is usually presented as a grim loner; thus, it's surprising when, coming upon the thief Alvazar buried in hot sand up to his neck, Conan jovially gives him a refreshing drink of dog's blood, then butchers the priests who were executing the man for stealing a sacred relic. This version of Conan needs a comic sidekick, and his banter with Alvazar enlivens the string of adventures as the two team up to track down a series of magical objects that they hope to sell for money, but that also could open the way for a malevolent elder god to re-enter this world. Along the way, the two rogues encounter wizards, animated mummies, demons and a very lusty djinn. Severed limbs and heads fill the air every few pages, but so do good-old-boy quips. Truman has been expert at drawing this kind of droll action-adventure since , and Lansdale has honed a knack for sly, outrageous humor in his crime novels . Their collaboration is a genuine, if somewhat guilty, pleasure.