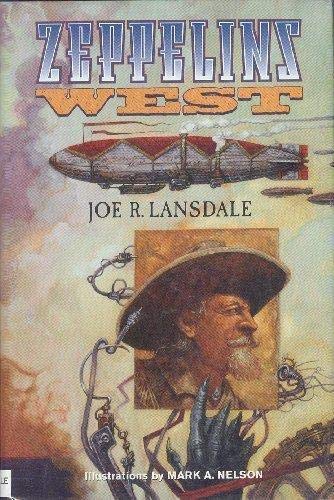 Irrepressible, irreverent and unpredictable, this hilarious fantasy with nostalgic touches of yesterday's SF shows off the narrative skills of an inventive author altogether comfortable in his métier. Legends of the Old West, plus characters both real and fictional, enliven the shenanigans, commencing with Buffalo Bill Cody, a head in a jar atop a mechanical body (after his ax-wielding wife caught him in bed with singer Lily Langtry), escorting his Wild West Show by zeppelin to Japan. Wild Bill Hickok romances Annie Oakley and discusses his old friend George Custer with his new friend Sitting Bull, who packs much comic punch in few words ("White eye motherfucker in wrong place at wrong time"). A ribald tall tale only gets wilder and wackier. In Japan, Cody spirits away Victor Frankenstein's monster, here fresh from the Arctic and unwillingly serving, from his foot up, as an aphrodisiac for a local shogun. Cody wants to go to "the island of Dr. Momo," in order to get that scientist to make him a similar body. Escape proves more difficult than arrival, however, when Japanese biplanes shoot down the zeppelin over the ocean. Happily, "Captain Bemo" in his submersible, the , comes to the rescue, and the gang proceeds to Momo for more amusing adventures. With a striking jacket design and interior line drawings by Mark A. Nelson, this novel is one big joyride from start to finish.