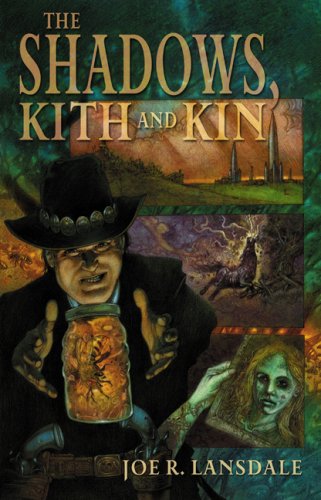 The Shadows, Kith and Kin

Lansdale's restlessness with the conventions of any one genre is proved once again by this marvelously mixed collection whose nine stories provoke responses ranging from cold chills to gut-busting belly laughs. The unsettling title tale puts the reader inside the cobwebbed mind of a mass murderer, who cloaks the truth of the business he's about in eerily self-deceiving metaphors. "White Mule, Spotted Pig," about a redneck's antic efforts to capture and race a legendary wild white mule, reads like a contemporary tall tale out of Mark Twain's Calaveras County. Two period pieces feature Jebidiah Rains, the author's gunslinging preacher from his novel : "Deadman's Road" pits Rains against a nightmarish walking corpse animated by a live hornet's nest in its chest, while "The Gentleman's Hotel" has Rains battling a horror from the prehistoric past that has turned its small corner of the southwest into an arid ghost town. Laconic, ghoulish and often outrageously bawdy, these stories are never less than solid entertainment.