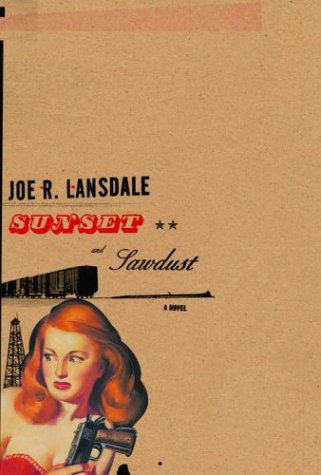 The prolific Lansdale's novels ( ; ; ) are always wild and wooly, and this redneck noir stand-alone is no exception. Lansdale has shifted the time frame to the 1930s, but the novel is still set in his usual series location, East Texas—and it's still peopled by the oddest bunch of characters ever to leap off the page. The book opens in the midst of a cyclone as beautiful red-haired Sunset Jones is being beaten and raped by her no-good husband, Pete, in their ramshackle home. Fearing for her life, Sunset picks up Pete's .38 revolver (he's the town constable) and shoots him dead, just as the cyclone carries off most of their house. After recovering from the beating ("She felt as if she had been set on fire and put out with a yard rake"), she's elected to complete the remainder of Pete's term as constable, and she's more than equal to the task. A couple of dead bodies and a land fraud scheme come to light, along with some of the creepiest low-life bad guys to ever crawl out from under a rock. The mystery is only mildly engrossing here; the great pleasure of Lansdale's work lies in his pitch-perfect vernacular prose ("He had greeted them as they climbed into the car, and they hadn't said so much as eat shit or howdy"). The book opens with a cyclone, ends with a plague of grasshoppers and in between there's insanity, extreme violence, sex, grotesques aplenty and an excellent dog. What's not to like?