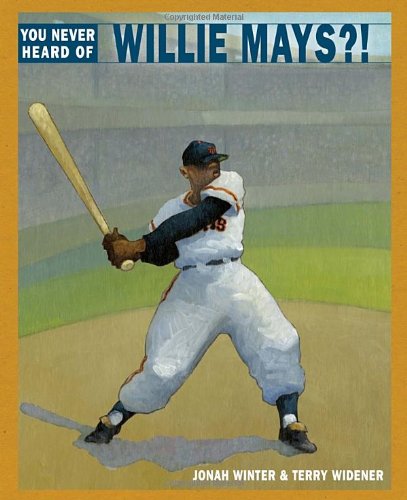 You Never Heard of Willie Mays?!

Winter and Widener, who previously teamed up on Steel Town, return with a stellar companion to Winter’s equally superb You Never Heard of Sandy Koufax?! Like its predecessor, this profile of Hall of Famer Mays immediately grabs attention with its lenticular cover; however, it’s Mays’s on-the-field feats that cement his place in baseball lore, especially that unbelievable catch during the 1954 World Series. Growing up in Birmingham, Ala., Mays “was the kid all the other kids wanted on their team.” Before long, his talent is recognized and, at age 15, he got his start in the Negro Leagues. “Suddenly, this teenage kid was makin’ more money than his pop,” writes Winter in the colloquial voice of a practiced raconteur. “And when, the year after that, the major leagues ended their stupid rule barrin’ black guys, there was a ray of hope that one day Willie might play in the majors, like Joe DiMaggio.” Widener’s smoky, smudgy acrylics project the determination and dedication that took Mays from industrial, segregated Birmingham to the national stage. A must-have for baseball fans. Ages 4–9. (Jan.)
close
Details