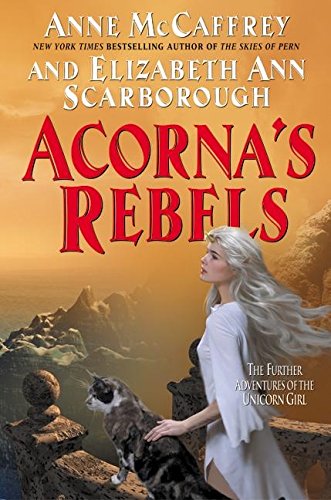 McCaffrey (the Pern series) and Scarborough () offer another readable, lightweight cross between fantasy and SF in their latest novel about Acorna, the Unicorn Girl. A member of the Linyaari, a humanoid race with horns in the middle of their foreheads, Acorna continues to hunt for her beloved life-mate, Aari, who disappeared in (2002). She travels aboard the starship to the planet Makahomia, which she finds in the grip of a plague killing the sacred Temple cats. Acorna fights a desperate rearguard action against the plague with her horn's healing power, but the mystery clearly lies deeper. With the aid of both shipmates, who include the Temple cat Roadkill (aka RK), and local Makahomians, among them shape-changing priests who can turn into cats, Acorna strives to prevent disaster. She ends up somewhat closer to Aari's trail through space and time, but clearly with several books worth of adventures to go before she reaches him. While it's not up to the highest level of either author's work, this installment will certainly engage long-time readers of the series. And don't overlook its being a feast for cat lovers!