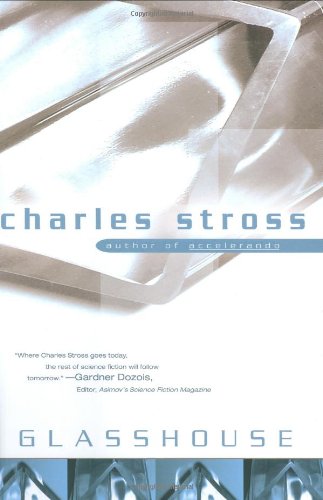 The censorship wars—during which the Curious Yellow virus devastated the network of wormhole gates connecting humanity across the cosmos—are finally over at the start of Hugo-winner Stross's brilliant new novel, set in the same far-future universe as 2005's . Robin is one of millions who have had a mind wipe, to forget wartime memories that are too painful—or too dangerously inconvenient for someone else. To evade the enemies who don't think his mind wipe was enough, Robin volunteers to live in the experimental Glasshouse, a former prison for deranged war criminals that will recreate Earth's "dark ages" (c. 1950–2040). Entering the community as a female, Robin is initially appalled by life as a suburban housewife, then he realizes the other participants are all either retired spies or soldiers. Worse yet, fragments of old memories return—extremely dangerous in the Glasshouse, where the experimenters' intentions are as murky as Robin's grasp of his own identity. With nods to Kafka, James Tiptree and others, Stross's wry SF thriller satisfies on all levels, with memorable characters and enough brain-twisting extrapolation for five novels.