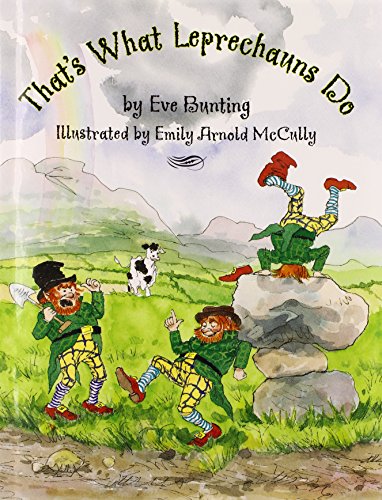 That's What Leprechauns Do

Bunting ( ) adds a bit o' blarney to a favorite Irish legend as she imagines three leprechauns on a mission to place a pot of gold at the end of a rainbow. As storm clouds begin to roll in, Ari the leprechaun rouses his two colleagues, Boo and Col, for the latest gold job. "It's a leprechaun's duty, so it is," Ari notes of the somewhat wearisome task; "not a single soul ever finds it," Col laments. But on the road to Paddywhackers Bog, where the gold remains hidden on non-rainbow days, the three leprechauns also make mischief ("That's what leprechauns do... Along with our more important duties," says Ari in a kind of refrain). Painting the hooves of Mrs. Ballybunion's cow red and tying Old Jamie Bradley's drying long johns in a knot keep the trio more than amused. By tale's end—and rainbow's end—they're ready to do it all again. Bunting offers a kicky if slight outing here, bringing a dash of modern silliness to her twist on familiar lore. McCully ( ) portrays the leprechauns as a craggy-yet-cute blend of dapper and disheveled fellows, donning red buckle shoes, bright green tail coats and blue-and-white striped stockings, all of which accent their smiling eyes. Scenes of the little heroes rolling in the grass or doing a jig in the bog will put a touch o' spring in readers' steps. Ages 5-8.