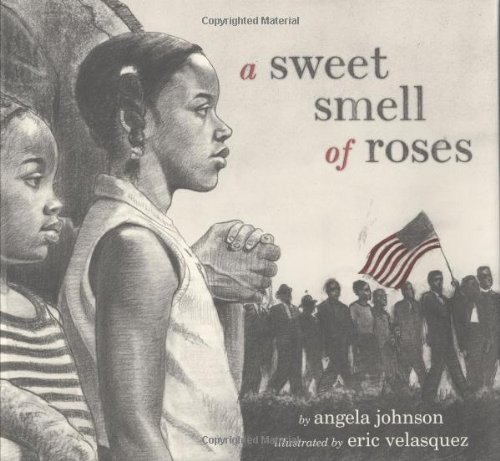 A SWEET SMELL OF ROSES

According to an author's note, Johnson's ( ) story pays tribute to the children who played a role in the civil rights movement, the "brave boys and girls who—like their adult counterparts—could not resist the scent of freedom carried aloft by the winds of change." Velasquez ( ) notes that his art pays homage to Harvey Dinnerstein and Burt Silverman, whose artwork "help[ed] spread the news of an oppressed community's fight for justice and equality." Together, text and art evoke the gumption of two spirited sisters who sneak out of their home one day to participate in a march led by Dr. Martin Luther King, Jr. "After a night of soft rain/ there is a sweet smell of roses/ as my sister, Minnie, and I slip/ past Mama's door and out of the house/ down Charlotte Street," opens the spare, poetic narrative. The smell of roses surfaces repeatedly—as the group marches past hecklers, as Dr. King addresses the marchers, and as the girls return home to their worried mother, at which point the scent emanates from blooms in a window box of their house. Some readers may wonder what prompted the sisters to surreptitiously join the march, but most will appreciate experiencing the event from a child's eye-view. Velasquez's understated, realistic charcoal illustrations make effective use of color, seen only in the red stripes of the American flag, the red ribbon around a teddy bear's neck and the red roses in the window. Ages 5-8.