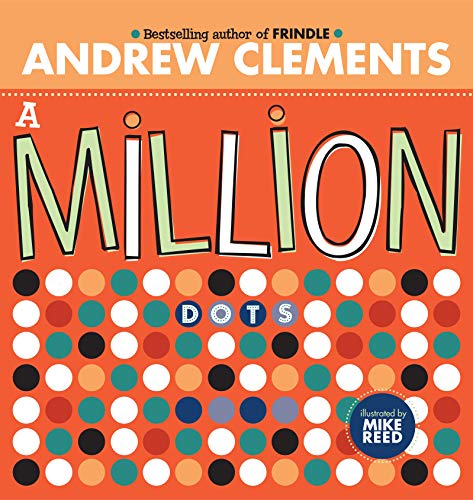 Clements ( , reviewed below) sets out, with mixed results, to explain the concept of one million through a roundup of number factoids and an accumulation of tiny dots. After viewing the opening page—which presents a single period-size dot—readers see roundups of 10; 100; 500 and then 1,000 dots. On subsequent pages, Reed's vividly hued digital artwork, imposed against peg-board like backgrounds of minuscule dots, demonstrates bits of number trivia. Beginning with "The wings of a mosquito beat 600 times each second," the data progresses—quite arbitrarily—to increasingly larger numbers: from 600 to 1,860 (the number of steps to the top of the Empire State Building) then on to 24,901 (the number of miles around the Earth at the equator). In each illustration, a single dot is circled, presumably representing the number that corresponds with these highlighted facts. At the bottom right of each spread, a running total appears (e.g., "142,911 dots so far"). Readers may find some of the numerical facts Clements reveals intriguing, while some other facts may seem silly or vague (e.g., for the number 464,000: "It would take 464,000 school-lunch cartons of chocolate milk to fill a 20-by-40-foot swimming pool"). Reed's illustrations are similarly uneven, presenting images that range from bland (a tooth-brushing scene) to humorous (a herd of dogs chasing a postman for "More than 765,174 men and women work for the U.S. Postal Service"). Though, in theory, the volume demonstrates the impressive size of one million, kids may well be more confused than enlightened by the presentation here. Ages 4-8.