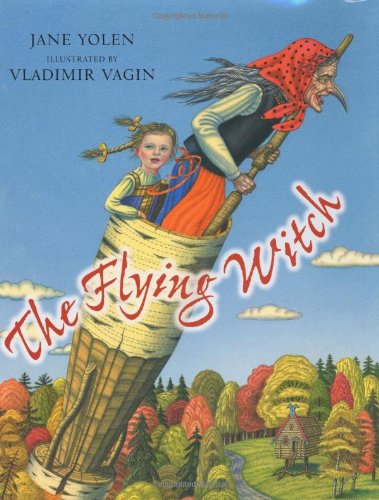 Two strong females dominate this Baba Yaga tale from the team behind . Faithful to Russian tradition, the Baba Yaga featured here flies about in an enormous mortar and pestle, searching for children to capture and bring home to eat. In Yolen's version, a nameless girl triumphs over the witch, and reforms her in the bargain. After the girl falls off her father's truck on the way to market, Baba Yaga offers her a ride in her strange mode of transport. "Something is not right," the girl thinks, as the witch carries her off in the wrong direction. "But I have two good feet, a fine sense of direction, two strong arms, and a clever mind. I will get away on my own." Meticulously drafted paintings depict old Russia's onion domes, birch forests and steely gray skies. Traditional motifs and stylized forms infuse the illustrations with a strong folk flavor, as they also incorporate antique tools and peasant costumes. Baba Yaga's black fingernails and scythe-shaped iron nose mark her as a villainess. Yolen's cheerful outcome emphasizes the girl's sound judgment and friendly reconciliation with the witch, while Vagin's illustrations provide an undercurrent of ever-present danger. Ages 3-6.