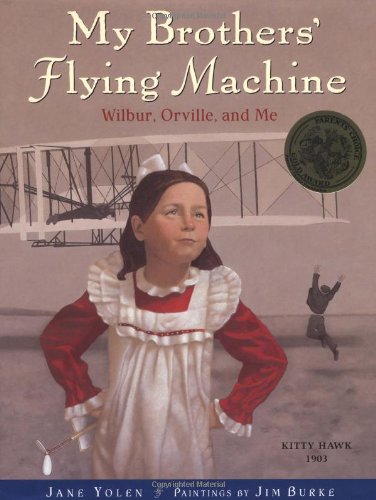 MY BROTHERS' FLYING MACHINE: Wilbur, Orville, and Me

Among picture books commemorating the centennial of Kitty Hawk, Yolen's is unusual for appropriating Katharine Wright, Orville and Wilbur's younger sister, as its narrator. This Katharine, however, is not the protagonist but the chronicler of her brothers' work, observing their youthful interest in a flying toy, keeping house for them after the death of their mother (while also working as a teacher) and running their bicycle shop so they could devote their time to building a flying machine. Laid out like a poem, the text packs lyrical moments ("I kept the store./ Will and Orv kept the sky") alongside factual details ("The craft was of pinewood/ covered with fabric/ and sealed with shellac"). Katharine herself remains a bit of a cipher; she's not fleshed out enough to justify the opening quote by Orville ("Much of our effort has been inspired by her"). In his first children's book, Burke contributes quiet, still paintings in a muted palette of grays and earth tones. Like the behind-the-scenes support offered by Katharine, the art may fall short of drama but projects steadfast control. Ages 6-9.