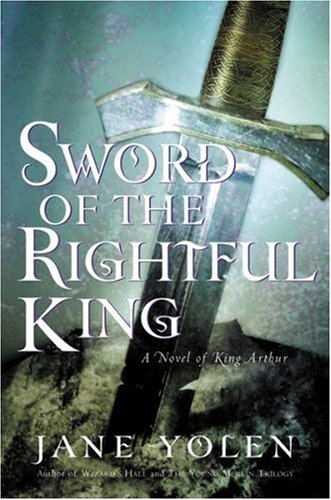 SWORD OF THE RIGHTFUL KING: A Novel of King Arthur

In Yolen's spellbinding twist on the Round Table legend, Morgause feels that her 17-year-old son Gawaine belongs on the throne of England. As she attempts to install him there, she tangles with both the court wizard and Gawaine himself. The author makes Gawaine the emotional lynchpin of the story; he mistrusts his mother and is wholly devoted to the only slightly older King Arthur. Portrayed here as the North Witch, Morgause detests Arthur (her half-brother, according to Arthurian lore), who she feels has usurped the throne. Morgause sends three of Gawaine's brothers back with him to Arthur's court under a diplomatic pretext, and Merlinnus, learning that one of Morgause's sons intends to assassinate Arthur, manufactures the tale of a sword lodged in a block of stone (which, of course, will prove Arthur's fated place upon the throne to a kingdom that has yet to fully embrace him). Yolen constructs a fascinating history linking Morgause to Merlinnus, and breathes fresh life into well-established characters; their encounters crackle with the vitality of overheard conversations. The dynamic between Merlinnus and Arthur is especially well realized: the former a shrewd, resourceful, fatherly man battling the discomforts of age, the latter a restless young king who merely tolerates the mundane responsibilities of monarchy ("Arthur had never met a chair he liked. Or a sport he disliked"). Yolen has explored Arthurian legend before, but her latest foray is a standout in this enormous canon. Ages 12-up.