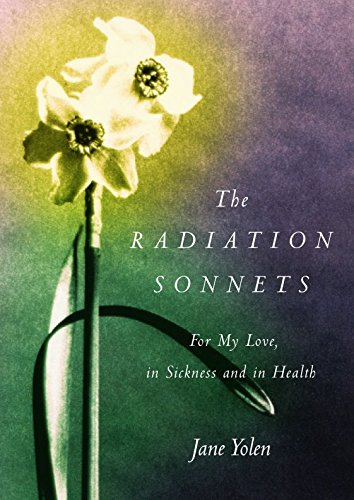 THE RADIATION SONNETS: For My Love in Sickness and in Health

These 43 sonnets by Yolen, a bestselling children's author (), are written in the traditional rhymed form with three quatrains and a couplet. After her husband, David, was diagnosed with an inoperable brain tumor, she found that composing a sonnet every night, when he was undergoing daily radiation treatments, was a discipline that helped her get through this difficult time. Through her poetry, she deals with emotionally painful issues, such as the changes in her husband's appearance, the suffering he was experiencing and the love and concern they felt for one another during this time. Yolen beautifully conveys the distance that can come between an ill person and his or her caretaker when both formerly lived as healthy partners. Other sonnets describe the effect of David's illness on their grown children and Yolen's fear that he would not survive. Several inclusions describe her sometimes ineffectual attempts to encourage David to eat more. Best read as verse-memoir, this short collection is a welcome addition to the many books written about coping with illness and death.