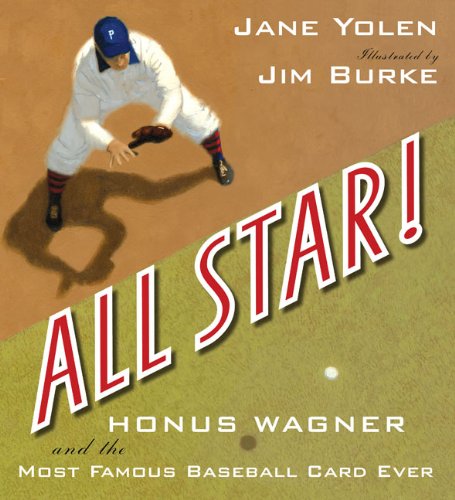 All Star!: Honus Wagner and the Most Famous Baseball Card Ever

How great does a baseball player have to be for his baseball card to sell for nearly $3 million? With emphatic prose and oil paintings that echo the perspectives and palettes of vintage photography and commercial art, Yolen and Burke amply prove that Wagner (1874–1955) did plenty to make that collectible worth every dollar. The treatment of Wagner’s hardscrabble early years—he left school in the sixth grade to work in Pennsylvania’s coal mines and used sandlot games to mold himself into a strong, fast, savvy player—is particularly masterful. What could have been a Bob Costas–like sports soap opera becomes an eloquently understated tribute to that archetypal American combination of stoicism, decency, drive, and sheer talent. Joining the Pittsburgh Pirates in 1900, Wagner went on to set record after record; as Yolen notes, “he did it all without drugs or fancy training programs or million-dollar incentives—just for the pure love of the game.” (True to form, Wagner had his baseball card pulled from the market when he learned it was being sold in cigarette packs.) That’s reason enough to take kids out to this ballgame. Ages 6–8.