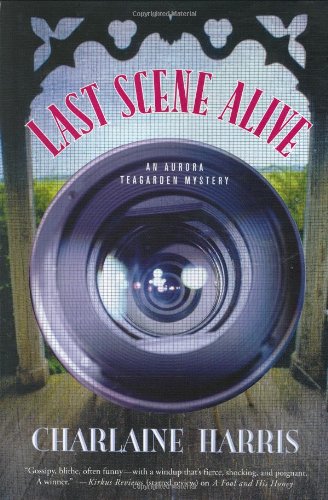 In her seventh cozy outing, librarian Aurora "Roe" Teagarden is back to form after the downbeat (1999). Roe and her once-significant other, true-crime writer Robin Crusoe, team up to untangle the results of their first foray into detection, (1990), in which they caught the killer who'd been terrorizing the sleepy town of Lawrenceton, Ga. Now Robin has capitalized on the experience to write a bestselling novel, which is being made into a TV movie. Of course, it will be shot in Lawrenceton, and the whole town is delighted and eager to be involved, except for Roe. Oh, she's glad to see Robin again after his years in Hollywood, but she's not pleased that the star of the film is Emmy winner Celia Shaw, her successor in Robin's affection, now also cast off. When Roe's unfriendly stepson, Barrett, turns up with a part in the film, she hardens her heart until the second morning of the shoot, when Barrett knocks on Celia's trailer door (after having spent the night there) to find Celia dead, her bloody Emmy beside her. Now Roe feels sorry for Barrett. The first investigator on the scene is another old flame, Detective Arthur Smith. Then Roe herself is threatened—first by a venomous letter, later by a Robin Crusoe fan who tries to kill her. Harris's style is well suited to the material, frothy and fast-paced with a wealth of witty descriptions: "Her voice was as crisp as if it'd been in the vegetable drawer overnight." Take a well-earned rest, Roe, don't lose Robin and return soon.