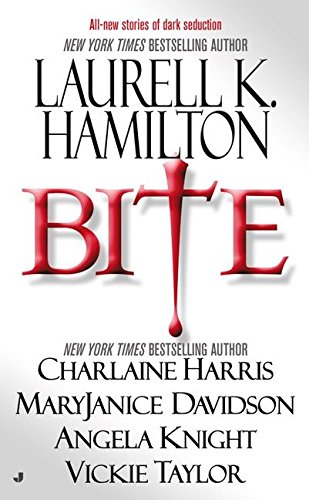 Those looking to take a brief taster's tour through five sexually charged paranormal worlds may enjoy the stories and novellas served up in this anthology, but readers with an appetite for something a little more meaty likely won't be sated. Although Hamilton's name dominates the cover, her contribution is a meager 30 pages, which amounts to little more than a teaser for her next Anita Blake novel. Harris's offering is similarly slim and static, though it shows off the cleverness of Sookie Stackhouse, the psychic heroine of her Southern Vampire series ( , etc.). By far, the collection's best offerings are Knight's "Galahad" and Taylor's "Blood Lust." In the former, a fledgling Majae (i.e., witch) teams up with the famed knight Sir Galahad, who's really a benevolent vampire, to destroy a nest of deadly cultist vampires. And in the latter, Taylor imagines a much more traditional world, wherein vampires can't touch anything sacrosanct and are organized hierarchically, a system the protagonists, a junior vampiress and a microbiologist-turned-vampire, are about to dismantle. The action moves swiftly in both stories, as does the romance, but like the other entries in this anthology, they lack depth and development. Nevertheless, this is a suitable introduction to the various worlds these authors have popularized.