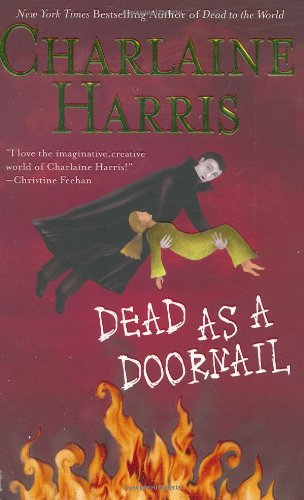 DEAD AS A DOORNAIL

Harris's rousing fifth Sookie Stackhouse fantasy-mystery (after 2004's ) pits vampires, were-creatures, shifters and one fairy godmother against a sniper with an apparent aversion to nonhumans. If trying to discover who's behind the shootings isn't enough, the telepathic cocktail waitress from Bon Temps, La., has to cope with a few other distractions: her sexy "Were" friend, Alcide Herveaux, needs her help in his father's bid to become the next leader of the local werewolf pack; her boss, Sam Merlotte (a collie in his spare time), gets shot; her house partly burns down; and what's she to do about the handsome vampire bartender who dresses as a pirate at Sam's place? Between one mishap and another, Sookie is one busy gal. Harris does an admirable job of creating a heroine who's not only interesting but completely believable in a world of the strange and the different. Natural and humorous dialogue and a nicely paced plot that doesn't dwell so much on Sookie's old boyfriends help make this entry the best yet in the series.